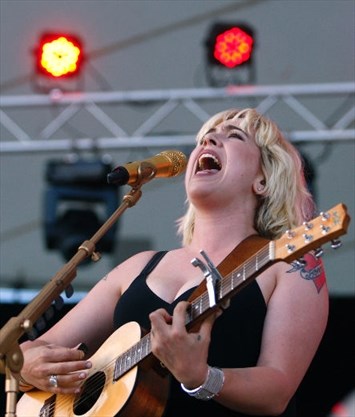 Serena Ryder – something about her name even hints of lurking greatness.

As a youngster, it was evident she was destined to reach goals to which others could only dream. Quite possibly, Serena’s years growing up in Millbrook, Ontario gave her a certain kind of stability found only in a small-town setting. It is equally evident that even while attaining the success she has already enjoyed, she retains a great deal of admiration and respect for the place from which she came.

During her years at PCVS she had the opportunity to hone her craft along-side Thousand Foot Krutch and Three Days Grace. Her songwriting became a vehicle for her expressive vocals and it was not long until industry and audience alike began to take note. Releases such as “Just Another Day,” “If Your Memory Serves You Well,” “Weak In The Knees,” and “Is it OK” solidified her popularity.  Awards – including prestigious Junos – began to reward Serena’s songwriting/vocal gifts.

It all happened so quickly that the resultant promotion and appearance whirlwind took its toll with a bout of clinical depression. Serena fought it with a determined response and in overcoming it, her works took on deeper, meaningful emotions which only resulted in gaining more appreciative audience attention. Then along came her hit “Stompa,” and with it international stardom.  Deservedly more Junos followed.

A highlight of a busy 2015 was her singing the Pan/Para Am Games official song, “Together We Are One.”
Serena Ryder never forgot her Millbrook roots and Millbrook did not forget her either.  In fact notification is given everyone approaching the town with “home of Serena Ryder” being added to the identifying Millbrook highway sign.