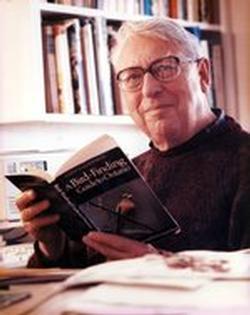 Douglas Sadler was born in London, England in 1916. He served in the 7th Armoured Division (Desert Rats) during World War II and with the Queen’s Royal Regiment in Holland. He spent six months imprisoned in Oflag 79, Germany.

It was during the World War II that Sadler met his future wife, Joan, in England. They were married in 1942. After the War, he served as a Captain in the Army and one of his tours took him to Singapore in 1947. He came to Canada in 1950 to work on Governor-General Vincent Massey’s farm near Port Hope, Ontario and later worked for the Port Hope Evening Guide in advertising.

This was the beginning of his newspaper career which ultimately led him to the Peterborough Examiner and the City of Peterborough in 1953. Part of his work at the Examiner included writing his now famous outdoor column, “Come Quietly With Me,” which he has now written for more than 30 years. Douglas has written close to 1500 columns on every conceivable aspect of the environment.

Late in his life, Douglas decided to return to school. He attended the old Peterborough Teacher’s College, and upon graduation, began teaching with the Northumberland Board of Education. He later became the vice-principal of Warkworth School in 1969 and worked there for twelve years before taking a job as an outdoor education consultant.

He then moved to the Peterborough County Board of Education. When the outdoor education program was cancelled in 1975, Douglas continued teaching at the Bailieboro School. At about the same time, Douglas became a member of the Peterborough Field Naturalists. After two years, he joined the Ontario Federation of Field Naturalists were he was a member for sixteen years, two of which were spent as the Federation’s president. Douglas has won the Frank Kortright Award twice and is an honorary life member of the Peterborough Field Naturalists. He earned a degree in geography in 1978 from Trent University and, in 1988, he was awarded an Honorary Doctor of Laws Degree from the same university.

In 1987 he authored the book “Reading Nature’s Clues.”