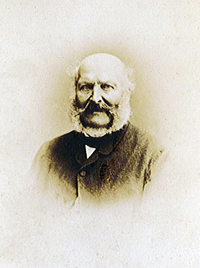 Sam Strickland was one of the earliest settlers in what is now Peterborough, arriving at the same time as the Peter Robinson settlers. He built the first house in the area on what is now Nicolls Oval, where visitors can read a plague bearing the following history…

“Sam Strickland was an orphan immigrant to Canada in 1825 sponsored by a family friend, Colonel Black of Darlington, Ontario. He purchased this property, now Nichols Oval, in 1829 and built his first house here. He worked for John Galt and The Canada Company in the Huron Tract.

“In 1830, he sold this property and purchased farm land in North Douro. Sam Strickland became a land commissioner, Justice of the Peace, teacher, author and family man.

“Two sisters, Catharine Parr Trail and Susanna Moodie followed him to the Lakefield area. His 1853 book, Twenty-seven years in Canada West, was a helpful guide for immigrants, mostly young and working poor hoping to succeed in Canada.

“Within its pages he described the three great ‘wants’ in Canada. “We need pastors, teachers and population.”

“Sam Strickland emphasized the development of community and the education of the young. Col. Strickland was an early advocate of assisted child emigration to Canada; by 1935 more than 900,000 young people came to Canada as “Home Children.”

The plaque was erected by The City of Peterborough, in partnership with The Fenner Foundation.

Sam Strickland was a leading citizen of the area and is recognized as the founder of Lakefield. He supported the construction of Lakefield’s first mill, its first passable road, and its bridge over the Otonabee River. He was a member of Council for Douro Township and of Peterborough County.

Samuel Strickland was a true pioneer, and a giant among men in every sense of the word.