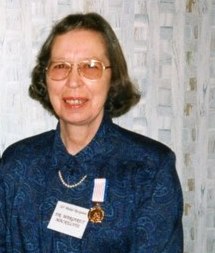 Margaret MacKelvie, teacher and community activist, was a woman with a deep, and abiding love for the magic of ‘living history.’

No one was more involved in the creation of Lang Pioneer Village.

Before Lang opened in 1967, Margaret supervised Village construction, including arranging for several buildings to be transported to the site. Over the years, she arranged ‘special days’ at Lang, as well as creating publications with a focus on Lang.

As evidence of her true devotion, Margaret served as volunteer curator from 1967 to 1995.

For her efforts, Margaret MacKelvie was awarded the Canada Commemorative Medal, an Outstanding Achievement Award from the Ontario Museum Association, and an honourary doctorate from Trent University.