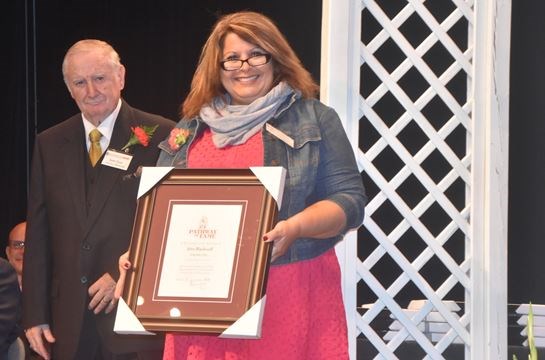 Kim Blackwell’s love of the dramatic was ignited as a youth, nourished at Adam Scott High School as well as through involvement in the Peterborough Theatre Guild. Her appetite for live theatre was whetted too, at an All Saints Anglican Church youth group, ‘Kids Unlimited,’ which served to solidify the direction her life would take. And what a journey that was to be.

Kim studied with the best live theatre groups this country has to offer; then independently tried her hand in forming Black Well Productions to help shape her dramatic traits. Kim’s 10 years immersed in various positions at Peterborough’s Union Theatre definitely assisted in helping her determine the consuming love of theatre that would shape her future.

Kim Blackwell can now be accredited with being a veteran 4th Line director/producer as 2016 marks her 22nd season with the stalwart company.  During those years she directed no fewer than 15 productions including 5 world premieres. Her stage credits from managing, development workshops, innovative interaction and teaching of young talent with seasoned professionals, plus the lengthy list of productions, catalogue her artistic progress over the numerous years with 4th Line Theatre. Its founder, Robert Winslow (POF 2006) has discovered in Kim Blackwell that rare commitment which has permitted him to completely entrust to her the company’s artistic control while he devotes his energies to the time consuming research required to bring productions to life.