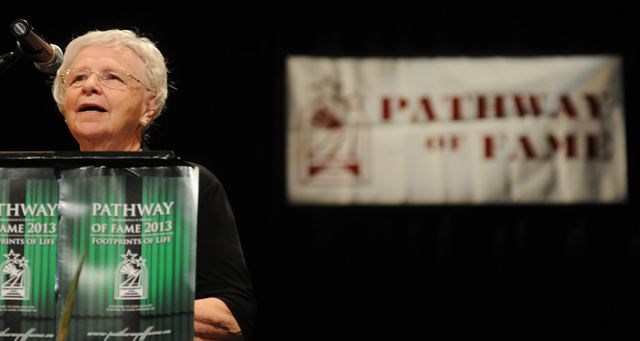 Ivy Sucee has fought zealously to keep alive the story of the Barnardo Home Children, the child emigrants of whom 9,000 came through Peterborough between 1883 and 1923. She has helped countless people gain access to Barnardo records in England and learn fresh details about the history of their ancestor who was a home child.

Her own father was a Barnardo home child and since 1995, she searched for information about Barnardos, which still operates in the United Kingdom handling adoptions and after care, but not emigration.

Her efforts have had some impact. A 1999 plaque summarizing the history of Hazelbrae, the Barnardo home and distribution centre, stands on a lawn near George Street. A dramatic monument listing the names of all who came through Peterborough stands on Barnardo Avenue on the lawn of Queen Alexandra school. To create that list was a major undertaking, for which Ivy Sucee recruited researchers and historians.

Ivy was a 25 year volunteer with the Peterborough Exhibition and helped produce their 1995 history of the fair.