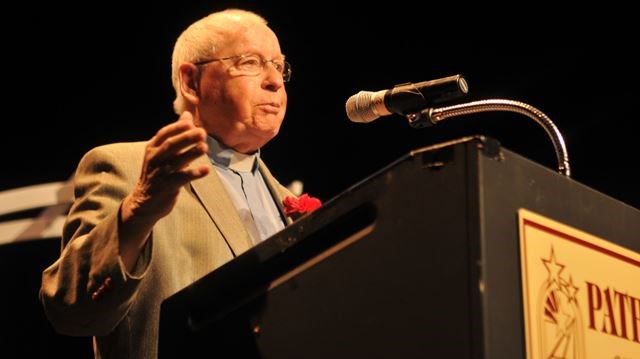 His vast reputation of never the narrow-minded or exclusionary cleric is legend in this area. His birth, and raising on a farm in Norwood may have had a lot to do with his ecumenical viewpoint on life.

‘Father Leo,’ or just plain ‘Leo’ to those who know him, has pastored the wider community, intellectually and spiritually, in life’s happy and sad moments without distinction. His greatest legacy is one of inclusion and genuine love and respect for all. Believers and non-believers have found in him one who is consoling, stimulating and collaborative.

Few clergy spend as much time visiting the sick at PRHC including those in Palliative Care, providing comfort to patients and family members during their difficult moments.

His life has been one of a lifelong search and study not only of spirituality but also of modern scientific cosmology.
Father Leo has an active internet presence (at Leospot.ca) where one can keep in touch with his thinking, read his Sunday homilies and read articles of interest from other contributors.

He has worked among leaders of all denominations and held workshops on difficult questions, such as death and dying. His secular community interests have seen him serve on the Board of Directors for Big Brothers and Big Sisters, organizing a commercial softball league and an industrial hockey league.

Father Leo Coughlin can be best described as a man who is loved by many – a happy and a humble man, a generous, spiritual and social man, and an all-inclusive person, – embodying all those qualities to which many aspire but few attain.