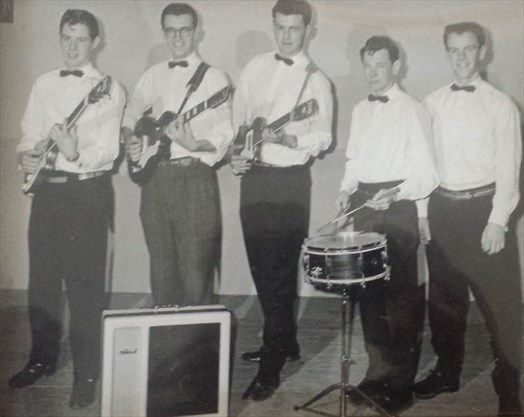 The group was also the first Peterborough band of the Rock era to appear on American television.  Individual members went on to work with numerous other groups, setting the standard for the rich Peterborough music scene that followed.

Excerpted from Ed Arnold’s book, Peterborough’s First Rock and Rollers, Back When We Were Young

“Mike McCutcheon formed the first rock and roll band in Peterborough’s history when he was a Kenner student. He sang and played some guitar. A record company had suggested putting together a band if he hoped one day to have a recording contract.

“Mike, the son of a local doctor, was just a teenager and approached fellow Kenner student Verne Hope who played drums in the school’s band. He had no idea that the teenage Verne had a classical piano background and had been playing keyboards for years.

“Someone knew two guitarists at St. Peter’s, Tom Kingdom and Gerry Guyatt. Tom, a city teen and Gerry a farmer’s son knew another farmer’s son, Joe Delaney, from Douro who played a mean keyboard but couldn’t read a single note.

“It was quite a mixed bag of teen musicians gathering at Mike’s family west end home to rehearse for their first public appearance at Del Crary’s talent tent at the Peterborough Exhibition in the summer of 1960. Mike had been taking some science classes at Kenner and was studying sonic booms so he named the band The Sonics.

“They were rehearsing such songs as Rock Around The Clock, stuff that Bill Haley was performing on the radio airwaves and Mike’s favourite musician of the day.

“Mike was hooked on the sounds of Bill Haley, Buddy Holly, and Elvis. That first gig at the Ex was so successful they got a few more invites to perform at dances and became the first rock and roll band at the Hastings Pavilion becoming its weekend house band. Their big competition was Fred Munro’s and Gary Hansler’s Count Victors.”