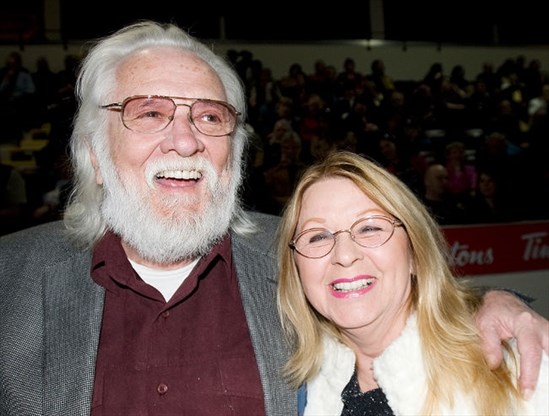 Born and raised in Arkansas but a longtime resident of the Kawarthas, Ronnie Hawkins was one of the earliest practitioners of Rockabilly Music, becoming one of the true legends of Rock n’ Roll.
This Juno Award-winner recorded over 25 albums and had a major influence on the careers of such music luminaries as Robbie Robertson, David Foster, Kris Kristofferson, Lawrence Gowan and Beverly D’Angelo. ‘The Band’ grew out of his backup band, and he and Gordon Lightfoot were lifelong friends and collaborators.
He famously hosted John Lennon and Yoko Ono at his farm north of Toronto in the early 1970s. Since then, Hawkestone Manor has, over the years, hosted dozens of celebs who were personal friends. Former U.S. President Bill Clinton was a fan, and personal friend.
Since moving to the Kawarthas, Ronnie was a frequent performer at The Peterborough Summer Festival of Lights and Hawkins, with his wife Wanda, were active for many years in the Peterborough Chapter of Schizophrenia Society of Ontario.
When Peterborough was devastated by a massive flood in 2004, Ronnie Hawkins was there to help line up performers for a fundraiser at the Peterborough Memorial Center. His friend Gordon Lightfoot was there as well. And The Hawk even did a few songs.
Having been diagnosed with pancreatic cancer in 2002 and given only a few months to live, Ronnie fooled them all and got two more decades out of the deal.
Ronnie Hawkins passed away May 29th, 2022 in his 88th year.
Photo courtesy Clifford Skarstedt, The Peterborough Examiner