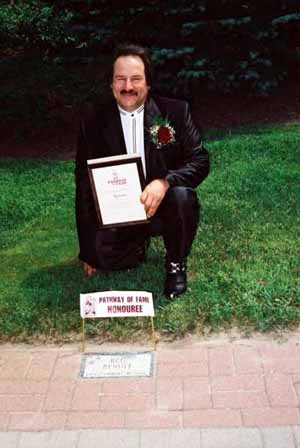 There’s a story familiar to Canadians, that of a young leaving Newfoundland to seek a better life in Ontario and beyond. Some abandon their roots. Special ones fight to keep the essence of their small, tight-knit birth places in their souls. Reg Benoit came to Ontario to build a future in music, but he never forgot the intrinsic value of individual human beings he learned about in Stephenville.

Typical of many musicians, Reg created a steady, if unspectacular career. He did well enough to garner acclaim, although not enough to quit his day job.

Then, in 1998, Reg’s world came to an abrupt halt. A serious spinal cord injury sustained at his day job forced him to pursue music fulltime and fine-tune his passion for life, and people. The unexpected tragedy became a new direction in service to others through music, and a deeper understanding of how life will work out. He’s performed tirelessly entertaining seniors, the sick, and in aid of notable lists of fundraising projects, large and small, public and personal. His music benefited St. John’s Children’s Hospital and Sick Kids Hospital in Toronto. He devoted time and energy to native groups and, when Canada’s last surviving Father of Confederation, Joey Smallwood, ran into financial difficulties writing his History of Newfoundland, Reg was there to help.

Along the way, Reg became a pastor in order to touch people in the darker corners where even music cannot reach. Reg Benoit is a symbol of those for whom music is not a road to riches, but a challenging path to the hearts of people.