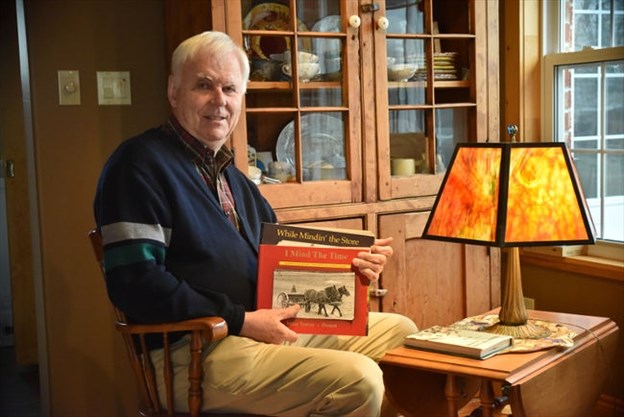 Mention the former Towns General Store, and ‘Douro’ will probably be mentioned in the same breath – and the reverse will happen when one mentions Douro – Towns General Store will be mentioned too. Ask the whereabouts of Michael Towns and you will be corrected to say ‘Mike’ Towns. For it is as ‘Mike’ that Towns is held by the entire region as the successful, dedicated and newly retired businessman, accomplished musician and now it’s more recent Author-In-Residence!

Just as his father and grandfather before him, Mike welcomed customers to the famous store established in 1892, and operated continuously until it succumbed to a massive fire on February 2nd, 2018. When minding the store for most of his life, he always showed a genuine interest and deep compassion for those who frequented his establishment.

It can truly be stated Mike’s journey has been walked with integrity, humility and grace. He is certainly regarded as a cherished gem within the community of Douro. Now it is Mike Town’s penning as an author too which has allowed the many descendants of Douro residents, those residing within it, and those who have moved away to rekindle their roots.

Mike’s two books, ‘While Minding The Store,’ and ‘I Mind The Time,’ chronicle the life and history of the early settlers and previous generations of Douro residents.  Readers are gently guided back to a time of faith, family and community.

Mike’s friendly demeanor, ready smile and handshake are testimonial that even in this hurried day and age, one can be assured of personal attention and interest – a genuine quality only transferred from generation to generation.
The Pathway of Fame was formed to enshrine important people such as Mike Towns who represent and maintain those special ideals that have made this area the extra special place that it is.