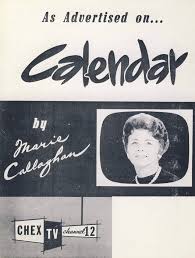 Marie Callaghan was an outstanding television talk show host long before such programming became common fare. In fact, it is safe to say she was a television superstar prior the industry ever coining the phrase.

Marie devoted 5 days a week for more than 21 years to her half hour Marie Callaghan Show. Beginning in 1954 until she retired in 1976, it is estimated the talented lady interviewed an estimated 20,000 or more guests.

Her schooling as a fully-graduated physiotherapist was never put to use, as quite by accident she was offered employment at CHEX TV. From that moment on, Marie balanced a home life comprising husband Jack, and their children Dennis and Lynn, with producing and starring in her own daily TV show.

Nowadays she would be a pioneer in the then-fledgling television industry. That possibly could be one of the reasons she was privileged to “call her own shots” so to speak, and run her program without executive interference. The Marie Callaghan Show was programmed almost autonomously from the rest of the station – so much so that she was in the enviable position of having no restrictions as to  what she could, or could not do.

Marie possessed an innate sense of what would work and what would not, and she exercised that intuitive gift to its fullest. Marie Callaghan’s popularity grew with each passing program, and made her show a staple in East Central Ontario. When she finally volunteered to “throw in the towel” so she could enjoy more family time, she held the Canadian TV record for the greatest number of years of broadcasting at any one television station in all of Canada.

Marie gave of herself to a good many community causes. She certainly possessed the common touch, a humble quality which endeared her to all who came in contact with her. She was a lady who never placed herself above another, and was keenly interested in the lives of others while insisting to one, and all just to be known as Marie.

It was those characteristics she bequeathed to her family, friends, community and TV Industry. Attributes for which she will always be remembered, and revered.