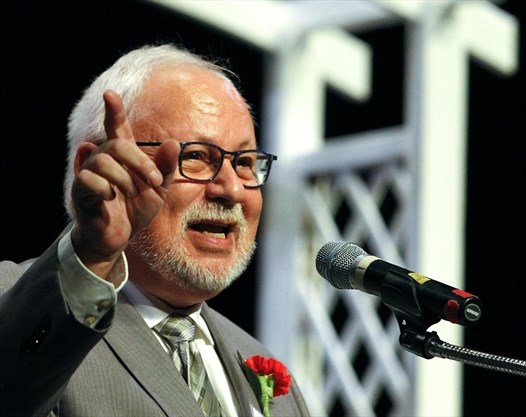 American novelist Thomas Wolfe’s book ‘You Can’t Go Home Again’ left the impression that one can’t return to what was and pick things up again. It’s most fortunate for Peterborough that Len Lifchus didn’t take that message to heart.

Arriving in Peterborough in 1999 as the newly-minted Chief Executive Officer of the United Way of Peterborough and District, Len served in that role for 10 years before moving to Hamilton to assume the same role in that city. This story would end here but for one thing – upon his retirement in 2014, Len returned to Peterborough to lend his energy, vibrancy and enthusiasm to a number of community initiatives.

In his first go-round, Len joined the Rotary Club of Peterborough-Kawartha and was involved in numerous club projects. Upon returning to the city, he maintained that association by serving in a number of executive positions, including club President for 2017-18. Armed with the ability to juggle numerous projects at one time while bringing people together towards a common goal, Len’s leadership and determination has lifted his fellow Rotarians to new heights. Those contributions have been acknowledged through recognition as a Paul Harris Fellow – Rotary’s highest honour.

Len has gifted that same passion and commitment to the local theatre realm, most notably with the Peterborough Theatre Guild for whom he has directed numerous productions including The Mikado, La Cage Aux Folles, and Cats. In addition, Len’s directorial skills resulted in Ain’t Misbehavin’ and Tonic@Twenty being very successful fundraisers for the Showplace Performance Centre. In October of 2018 he shepherded ‘The Music of ABBA’ across the Showplace boards to rave reviews.

In addition, a number of Board, and Committee tables have seen Len pull up a chair.

Never afraid to roll up his sleeves when there’s a job to be done, Len chaired the United Way’s 75th Anniversary Celebration in 2016 and, that same year, assumed a lead role with the volunteers for the Canada Games. And if you wondered as to the identity of Rotary Man at the 2018 Polar Plunge, take a wild guess…

The Warming Room was the benefactor of Len’s chilly dip into Chemong Lake.