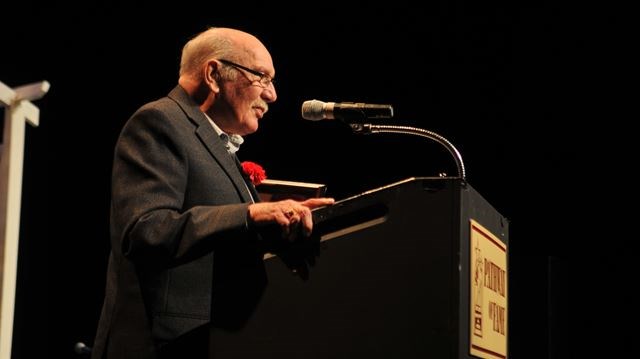 Many Peterboronians may not be capable of correctly spelling his last name, but it is certain there are not many citizens who have not heard of him. Also affectionately known as ‘Johnny O’, he is well-regarded for his commitment to music and for the generosity he has shown sharing his time and talent.

John Oosterbroek’s life and musical journey are one, and the same. From the time, at 8 years of age, when his father taught him clarinet, his passion for playing and sharing his talent spread from his native Utrecht, Netherlands to Europe, the Middle East and North America. His teaching at Thomas A. Stewart Secondary School and Lindsay’s LCVI High School endeared him to generations of aspiring musicians.

It is his involvement as Conductor of the Peterborough Symphony Orchestra (PSO) and Peterborough Concert Band, as well as his status as a lifetime member of the Kiwanis Music Festival, that shine as his crowning achievements. So too, are the many, many people who have benefited from dutiful teaching courtesy of John and his wife in one of the two New Horizon Band organizations in this area.

A serious accident while performing only slowed him for a while, but with his recovery came his renewed dedication to giving of himself. A recipient of an Ontario government Volunteer Service Award for his work with the PSO, John Oosterbroek has touched so many hearts and brought forth their love of music.

With great pride and humility, The Pathway of Fame welcomes Johnny O to join its group of distinguished Honourees.