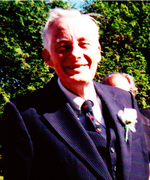 Modern communications can often be a mysterious blend of words, ideas and technical hardware. John Gilbert Jones began his life as a television technician and HAM radio enthusiast. That was the ‘medium’ side of the ‘message.’ The ‘message’ side would come later.

Composing stories and a passion for narrative started as a youthful and personal pastime. Then in the 1960’s, John decided to pursue his dream of becoming a storyteller. Honing his craft as he went, John produced his acclaimed ‘Swamp Cedar Stories.’ He also undertook a daunting, but fulfilling project: updating and revising Hillier Williamson’s acclaimed history of Omemee. The book was originally published in 1968. John’s update was a popular success, rekindling enthusiasm for local history. The book became a turning point in helping to revitalize Omemee and District Historical Society.

John’s efforts didn’t go unnoticed. For his work, he was awarded a Certificate of Achievement by the Ontario Heritage Foundation.

An integral aspect of communication and writing, is to assist other aspiring and established communicators. To that end, John was an energetic influence on the Kawartha Lakes Writers Association as well as writing groups in Keene and Peterborough. He was also an ardent supporter of the Historical Society’s annual Book Fair.

For a natural storyteller, the life of each human being, and of each community, represent stories that ache to be told, and shared. The Kawartha region was lucky to possess such a passionate storyteller, as John Gilbert Jones.