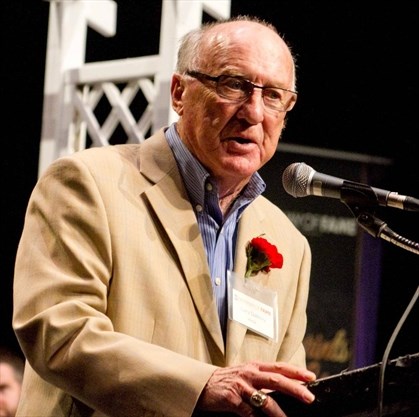 Gary Dalliday became an institution in the area’s sporting fraternity during his 34 year career as Sports Director of CHEX TV and Radio.

Gary traded his job at General Electric in the mid 1970’s for the demanding, and somewhat tenuous sports executive post. It was a life-changing decision he never regretted making.

Dalliday was an athlete in his own right, playing Junior B hockey, a handful of games for Scotty Bowman’s Peterborough Petes as well as starring for years In the City softball league.

Gary Dalliday has made sports his life – and along with it, devoting what little spare time he had available to emceeing and hosting hundreds of charity events. In fact, the amount of work he devoted to charities became about as demanding as his job.

He deservedly was inducted into the Peterborough and District Sports Hall of Fame in 2001 as a builder and athlete.
If one attempted to list a number of the colourful sports personalities who have dotted the Peterborough landscape and contributed to the local scene – among them, Scotty Bowman, Johnny Danko, Bob Gainey, Red Sullivan ,Chris Pronger, Dick Trotter, Bill Bennett, Roger Neilson – the name of Gary Dalliday is ranked right up there with them.

Besides the 34 years he was ‘Mr. Hockey’ on CHEX TV and Radio, he and his youngest son, Peter comprised a revered broadcast duo calling Peterborough Petes games on radio for 16 years. Son Peter did the play-by-play and Dad, Gary was the analyst.

Gary Dalliday retired from CHEX TV in 2009 but his caring demeanour, dedication to the sports fraternity and his tireless efforts supporting countless worthwhile causes will forever place him in high regard of the grateful community he served so well.

It should be noted that his son, Peter Dalliday, continues in his Dad’s footsteps and upholds the Dalliday family’s quiet legacy of service above self, as well as calling hockey and lacrosse for Your TV and the Halifax Thunderbirds, as well as co-hosting morning radio in Peterborough on 100.5 FRESH FM.

Gary Dalliday died in August, 2018 following a long, and courageous battle with cancer.