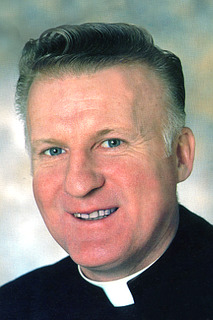 There’s an old Celtic saying; the greatest sin is the unlived life. This individual’s life is a true mosaic of experiences, events, relationships and dedications to his belief. It could never be said Father Bernard Heffernan is guilty of an unlived life.

An ordained priest since the early ‘60’s, this son-of-Douro worked as labourer, plumber, truck driver and RCAF flight lieutenant. His parishes existed in quintessential small-town Ontario, but often his congregation was the world.

Father Heffernan was an innovator in the use of mass media to spread his message of faith. He penned, and produced the widely-distributed TV series ‘The Church’ as well as numerous radio programs and series. He’s written an influential and well-received book called ‘The Future Vision of the Christian Mass Media Mission.’

Whether interviewing celebrities such as Garth Brooks, spending time listening to prisoners in local jails, or seniors in nursing homes, he always held fast to the belief that each person is valued in God’s eyes. Regardless of his many accomplishments in mass media, for Father Bernard Heffernan, faith is passed on one soul at a time.