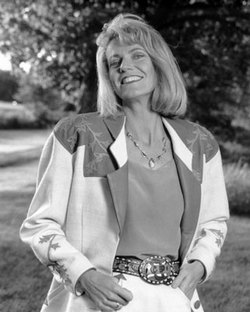 Peterborough born, country music singer/songwriter, Colleen Peterson had one of the purest voices ever recorded in Canadian history.  She was a two time Juno winner, and her songs were featured constantly on country radio in Canada.

CBC supported her career as well.

During Colleen’s colorful career she recorded three albums with Capitol Records Canada. Sadly, these recordings are no longer available as the albums are no longer a part pf Capitol’s active catalogue.  Many of these songs can be found on Colleen’s My Space page, and this is the only known site to archive these great songs.

She also recorded her own CD in the early 1990’s called “What Comes Around Goes Around,” but here again this work is no longer available.  Peterson released one album for the indie company, Bookshop.

Colleen also recorded three albums as a part of Quartette during the early 1990’s and remain available through the Quartette website.

The final recording of Colleen’s work, “Postcards From California,”  was released posthumously in 2004 and is available through CD Baby.