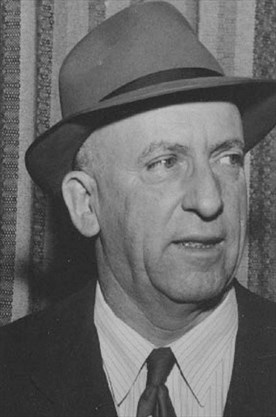 Even a most fleeting visit to the Peterborough & District Sports Hall of Fame will confirm the important role sports play, in Peterborough’s cultural life.  But would sports be as popular if the accomplishments of games weren’t reported with enthusiasm and clarity?  In Peterborough journalism, Cec Perdue set the bar for all sports reporters who’ve followed.

In 1931, Cec became The Peterborough Examiner’s first sports editor, serving as reporter and columnist for the next 37 years.  He covered area sporting events and those around Ontario and across Canada with any Peterborough connection.  For his writing, he earned a reputation as a fair, honest and respected reporter who genuinely understood, and appreciated athletes and athletic competition.

In recognition of his journalistic skills and his contribution to Peterborough community, he was given a Civic Award by the City in 1965.  Cec Perdue was inducted into the Peterborough & District Sports Hall of Fame in its founding year of 1980: a fitting tribute for one of Peterborough’s most fondly-remembered pioneers of journalism.