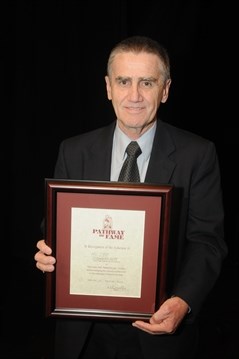 A retired computer science professor at Sir Sandford Fleming College, Al Tye has been a dedicated volunteer with the Peterborough Theatre Guild (PTG).

He directed 13 productions between 1980 and 2010, enjoying outstanding success with Proof (2008). ln more than forty years of association with the PTG he was connected with no fewer than 170 productions, serving as mentor, producer, director, actor and set designer.

He also served as founding Artistic Director for the Whispers Dinner Theatre, directing 14 productions. He was a professional set designer for Arbor Theatre, and for the Kawartha Summer Theatre in Lindsay.

ln 2005, the Market Hall Theatre named Al Tye as one of Peterborough’s ‘Greatest 100 in the Performing Arts.’