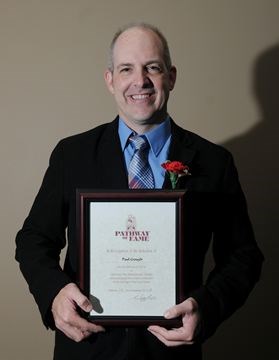 Paul Crough, in the words of his nominator, “has sung and danced and acted on virtually every stage in the area.”
He is a teacher at St. Peter’s Secondary School who has written, choreographed, directed his students to some remarkable performances.

He toured with Up With People. Locally he founded the Ennismore Homestead Theatre, and has written and directed their shows, designed the choreography and played the leading roles. He was outstanding in the 2013 Peterborough Theatre Guild production of Sound of Music. He played the lead role as Captain Von Trapp, and was a joint choreographer for this outstanding musical. He has had a major role in some forty shows. In 2011, he played the lead in Dirty Rotten Scoundrels. With the St. James Players in 2005 he was a tour de force with Slainte! the remarkable story of Irish emigration to this area, in which he was a co-writer and starred in the lead role.

Paul Crough is an energetic and enthusiastic supporter of theatre in all its local manifestations, and has sung and danced his way into countless audiences.