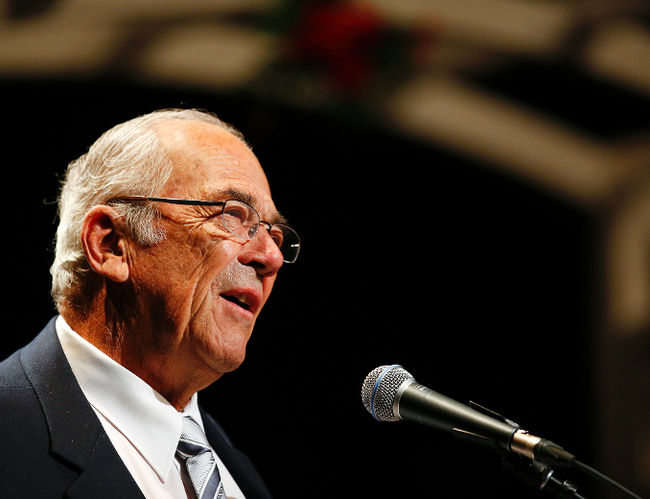 Every now and then, we’re lucky to meet someone who is bigger than life; someone who exudes unbridled confidence and has the moxy to tell it like it is, damn the consequences. Combine that with a distinctly authoritative voice that demands our attention and, well, you have David John Badham.

John’s 60-year broadcasting career began in Weyburn, Saskatchewan where his booming baritone voice fell upon the ears of the province’s most popular radio station in Regina. He was hired as CKCK’s morning news anchor and became the iconic voice of the Saskatchewan Roughriders of the Canadian Football League.

After 10 years at CKCK, 1969 saw John summoned to Toronto to call games for the Toronto Argonauts. He did so for three Toronto radio stations before heading west to call games for the BC Lions and then returned east to do the same for the Ottawa Roughriders. Come 1988, John was seconded to Peterborough where he began a new adventure as morning news anchor for Power Broadcasting. What was to be a short-term job with KRUZ Radio and The WOLF turned into a 28-year tenure that built upon and solidified John’s legacy as a leading broadcaster, not just locally but across the country.

With morning show co-host Mike Melnik, John talked Peterborough. He challenged local politicians, calling them to task for their decisions and their waffling. He was controversial; he spoke his mind and listeners shook their heads in agreement or disbelief, and often both. Urged more than once to stand for election, John declined, saying he could do more Peterborough as a commentator. That he indeed did, morning after morning, hosting his own show on Extra 90.5 FM right up until his passing in late 2016.

Over his six decades behind a microphone, John covered Olympic and Commonwealth Games events, world and Canadian curling championships, and a Super Bowl. Along the way, he interviewed iconic sports figures such as Gordie Howe, Pele, Wilt Chamberlain and Muhammad Ali. When hockey great Bobby Hull signed his then unprecedented $1 million contract to play for the Winnipeg Jets of the World Hockey Association, John was there, the only reporter on hand.

Deeply devoted to his family, John and Dorothy were blessed with four children, 12 grandchildren and one great grandchild. Clearly, despite his many travels across this country, Peterborough was home for John.