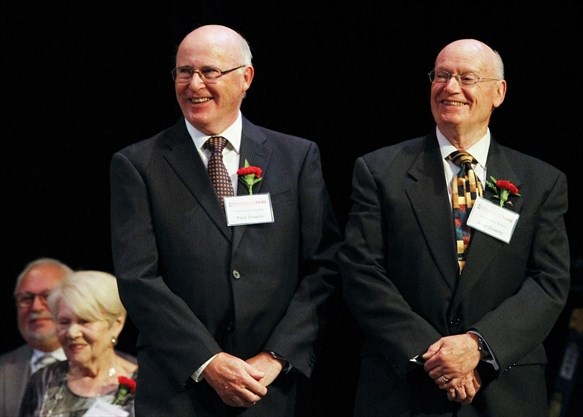 When it comes to the immeasurable level of giving, and support that John and Paul Downs have provided the local community, the challenge lies in finding an organization or cause that hasn’t benefitted from their kindness.

Raised in Toronto, John graduated from Queen’s University with a Bachelor of Science in Electrical Engineering. He started his career in marketing, first with Northern Telecom and then GTE Automatic Electric.

Paul, meanwhile, obtained his teaching certificate from Lakeshore Teachers College in Toronto and then his BA from Wilfrid Laurier University in Waterloo. For 15 years, he taught elementary school, eventually serving as a vice-principal and principal while attaining his Master of Education degree in educational administration from the University of Toronto.

In 1979, following the passing of his father Ed, John became the general manager of Durham Telephones Limited and Docon Telephone Supplies Limited before negotiating the purchase of Otonabee Municipal Telephone Systems in 1983. Close to 15 years later, John and Paul purchased cable TV assets from Shaw and the telecommunications conglomerate Nexicom was born.

Before the brothers sold Nexicom in 2017, some 1,000 people worked at the company’s offices in Millbrook, Peterborough, Lakefield and Lindsay while annual revenues went through the roof, climbing to an impressive $34.1 million in 2016.

While their business success and acumen is admirable on its own, it’s the Downs brothers’ incomparable giving spirit that sets them apart. In 2017 alone, benefactors of their philanthropy included the New Canadians’ Centre, the Peterborough Humane Society, Hospice Peterborough, the Peterborough Dragon Boat Festival, 4th Line Theatre, YMCA Peterborough, Special Olympics and Peterborough Musicfest, to name but a few. Since taking over the family business all those years ago, it’s estimated that John and Paul have donated more than $1 million to area charities and not-for-profits.

In addition, both have sat on numerous boards – 4th Line Theatre and Fleming College among the many organizations that have benefited from their involvement, and input.

A number of commendations and awards have come their way, including honours from the Peterborough Business Advisory Centre, Peterborough Economic Development, the Township of Cavan Monaghan, and the bestowing of top business excellence awards in Peterborough and Lindsay. Just this past May, the County of Peterborough honoured John and Paul with its Business Leadership/Entrepreneurial Innovation Award.