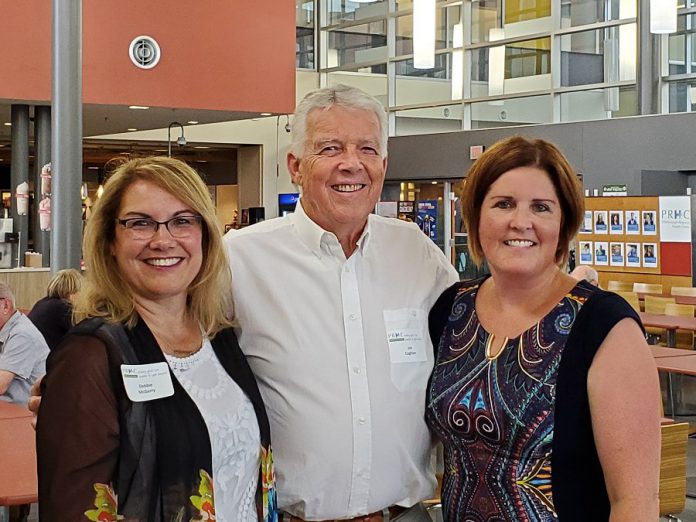 There are those who just give of themselves to the community without seeking public acclaim for their efforts. Jim Coghlan is certainly one who fits that description. His volunteer work has taken him to many corners of this area over the years and it continues today.

Well past retirement age, one might expect Jim to have slowed down a little, but fortunate for us such is not the case. For example, he is currently the President of the St. Joseph’s at Fleming Foundation Board, Past Chair of the St. Anne’s Church Parish Council, a member of the church’s Volunteer Screening Council and is a Lector and Eucharistic Minister. He is also a Director of the Kawartha Men’s Social Club.

Jim Coghlan has held several prominent positions in both the public and private sectors of his working life in which health care and amateur sports have been his focus. Jim was a founding member of the Peterborough Region CAT Scan Fund, as well as the Peterborough Hospitals Lottery and the Festival of Trees.

Sports have always been of keen interest to him, both as an active player, coach and leader. In 1986 he served as Chair of Logistics for the Ontario Summer Games when the City hosted them, and again in 1992 Jim was the Ceremonies Chair.

The event dearest to his heart just may have been the highly successful Arborough Games of which he was Founding Chair. The games were an International sports and cultural exchange between Peterborough and Ann Arbour, Michigan. Each City hosted over 1000 young 10 to 16-year-old athletes in 10 different sports. What a tremendous accomplishment that was, and no wonder one would never forget it!

All of these activities and more brought Jim Coghlan the 1985 Chamber of Commerce Citizen of the Year Award, and he can boast 2 Peterborough Civic Awards as well.