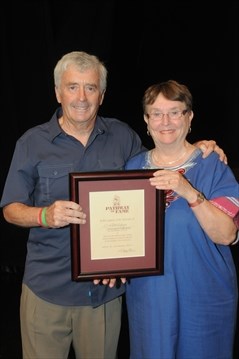 Jill, and her late husband Peter Adams were known as a great team working in countless ways to assist people near, and far. Jill Adams, a nurse by training, served as president of the Peterborough Theatre Guild (PTG) and as a long-time chair of the Anson House Auxiliary – as well as a member of the board for the Five Counties Children’s Centre. She has been an active volunteer with St. John’s Anglican Church, Canadian Hearing Society, Friendly Visiting Service, and the Lung Association. Jill was a producer and key fundraiser for the PTG when they submitted an entry in an international drama festival in Yokohama, Japan. She has volunteered with orphanages and shelters in Mexico, Jamaica and Baffin lsland.

Together, Peter and Jill visited Bangladesh, Honduras, lndia and Uganda on behalf of Sleeping Children Around the World. Both were also key volunteers for the Casa de Angelis home.

Peter Adams, a noted professor of Geography at Trent University, had a political career with the Peterborough Board of Education, and as Member of Provincial Parliament from 1987 through 1990, and Member of Parliament in Ottawa from 1993 through 2005. He also served as chair for the 1980 Ontario Provincial Summer Games held in Peterborough.